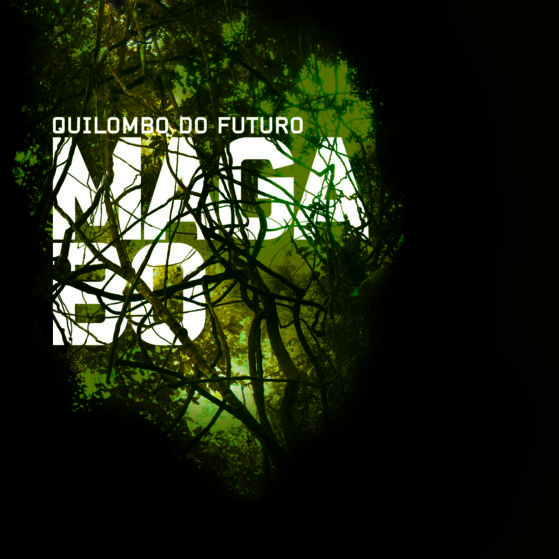 Quilombo do Futuro dives deep into afro-brazilian rhythms and sound system culture. It’s the roots of the terreiro growing and overtaking the asfalto. Crumbling it bit by bit. Life that springs from urban decay. Coco, maculelê, samba, jongo and capoeira meet ragga and dub, hip hop and kuduro, grime and dubstep. Organic elements combined with electronic production to bring the punch and power for big sound systems, this is serious batucada and bass, mids, treble. TUDO.

Maga Bo has performed and worked in over 50 different countries – from Delhi to Sydney, Berlin to Addis Ababa, New York City to Brasília, all the while keeping his feet (and ears) firmly planted in the sonic axis RJ/SP/BA – Rio de Janeiro, São Paulo, Salvador. Inspired as much by his experiences touring internationally in the global beats and bass world as his time spent in the traditional Afro-Brazilian roots scene in Rio de Janeiro, Quilombo do Futuro offers a careful juxtaposition of raw, heavy bass with organic, instrumental and vocal subtlety. Far from relying on pre-made loops of “Brazilian” drums or other shallow cultural signifiers, this album was recorded with some of the most original and brightest musicians in Brazil today.

Working with celebrated Brazilian musicians, BNegão, Gaspar, Lucas Santtana and Marcelo Yuka, the record also brings in new talents, Funkero, Biguli and one of the most innovative groups in Brazilian music today, BaianaSystem. Bo’s mestre of capoeira angola, Mestre Camaleão, brings the berimbau while Rosângela Macedo’s vocals hold down tradition. Guyanese Brooklynite, Jahdan Blakkamoore, and Panamanian Chicagoite, MC Zulu, bring the dancehall vibe to riddims that most don’t even try to touch. All percussion was tracked and produced by Maga Bo and his long time partner in riddim, percussionist and fellow carioca, João Hermeto.

A quilombo was an autonomous, fugitive settlement founded by ex-slaves and others in colonial brazil. The Quilombo do Futuro is more than a possible physical space. It is a potential world-wide agglomeration of cultural resistance. After centuries of wealth generated by an economy built on slavery (and the subsequent post-abolition adaptations), the Quilombo do Futuro is a break from this legacy. Fortified by an international community based on plurality, inclusive democracy and direct communication, cultural resistance is paramount in creating a sustainable, healthy existence in the face of world-wide corporate domination.

Born in the United States and based in Rio de Janeiro since 1999, Maga Bo has collaborated with Mulatu Astatke, Issa Bagayogo, Bollywood star Shilpa Rao, BaianaSystem as well as releasing critically acclaimed remixes for Poirier, Luisa Maita, Filastine, Blick Bassy and Bomba Estéreo. His music and remixes have also been released on Tru-Thoughts, Ninja Tune, Cumbancha, Dutty Artz, World Connection and many others. Among his many international tours, he has performed at the Sydney Festival, WOMEX, Club Transmediale and Mundial.

Available now on:
Back