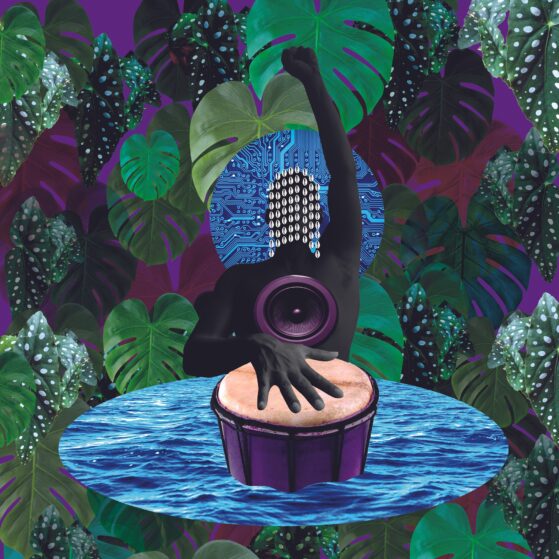 Pioneer of the global bass movement, producer, percussionist and DJ, Maga Bo returns with “Amor (É Revolução),” his first solo album in 10 years, furthering his on-going exploration of Afro Brazilian music, set for release on his own label Kaxambu Records on May 27th.

Internationally renowned for his production work on labels like Ninja Tunes, Tru Thoughts, ZZK and Soundway, Maga Bo has long been blowing the bass bins with his global mesh of digital roots music. On “Amor (É Revolução),” it’s in Brazil – where the US-born/naturalised Brazilian has been residing since the late 1990’s – the energy is channelled, on a powerful homage to the country’s and his own, rich and spiritual connection to the drum.

Collaborating with a veritable cast of singers, musicians and percussionists, contemporary and traditional, from north and south, on “Amor (É Revolução)” Maga Bo reconnects with some of his peers he worked with on his 2012 Quilombo Do Futuroalbum; artists like Russo Passapusso and Roberto Barreto from BaianaSystem (Salvador), singer Rosângela Macedo (São Paulo) and rapper Bnegão from Planet Hemp (Rio De Janeiro). He forges new connections with key names in Brazil’s contemporary scenes like Felipe Cordeiro (Belém) and Jeru Banto (Rio De Janeiro), and introduces to the world to some percussion and Afro Brazilian musical purveyors like Mestre Antonio Carlos de Xangô (Porte Alegre).

The debut single, Axé Para o Bará, features the late singer Mestre Antonio Carlos de Xangô, a male priest of the Candomblé religion known in Brazil as a ‘pai-de-santo’. The songs features an incessant, galloping rhythm section, a chorus of female call and response vocals answering the Mestre’s prayer and all joined together with Maga Bo’s trademark electronic production, retaining the natural essence and spirit of the music. It’s based around a special rhythm called the ‘toque aré’, and upon Maga Bo’s treatment, turns into a burning candomblé dub break mash up.

The second single to come from the long player is the title track Amor (É Revolução) ft. Dandara Manoela and BNegão. It comes with a DIY, fish- eye lens shot video giving a glimpse of life in the coastal town of Salvador in Bahia, North East Brazil and Santa Tereza in Rio De Janeiro , with kid skateboarders, glistening seas, church and catholic imagery and the burly presence of hip hop MC Bnegão and directed by Ana Júlia Theodoro, an up and coming Tik Tok/Instagram filmmaker and phenomenon.

For the third single, Maga Bo enlisted Peruvian digital cumbia and Latin trap experimentalists, Dengue Dengue Dengue as remixers on a track which features percussionist Alexandre Garnizé. Originally from Pernambuco, now based in Rio, Garnizé is a musical force who has long been an advocate of Afro Brazilian and Northeastern culture. Dengue Dengue Dengue are an electronic music production duo who carved out their name reimagining Afro Peruvian and Andean sounds, giving them new modern meanings but in recent times, having set up base in Berlin, now push their remit much further encapsulating the gamut of contemporary electronic music. Their remix is a pulsating percussive journey with a broken dembow bounce with flashes of vocals and chants, giving the track a break-neck vibe and definitely geared towards the dance-floor.

Finally, a second video clip was created to accompany the release of the track, “Cadê Zé,”which was simultanteously released on ZZK Records. The clip was produced in collaboration with video editor Rieg Rodig aka Riegulate using footage captured by Vincent Moon during a Yawanawá ritual festa at Aldeia Nova Esperança in Brazil.

The title of the album “Amor (É Revolução)” translates to “Love (Is Revolution)” and could well serve as a conceptual veneer for both Brazil and the world’s ills in this moment. Maga Bo’s refreshing take goes deeper, “to love is an action and conscious choice that embraces the transitory nature of life and recognizes that all is energy in transition, from micro to macrocosmic, always in revolution.”

“Amor (É Revolução)” has taken Maga Bo years to complete, with multiple visits to studios, dwellings and temples across Brazil, always with his digital backpack, a modest recording set up, ready to record.

Available now on:
Back